The Ben Ferrel Museum, also known as the Krause Mini Mansion, entered the National Historic Register in 1978.  The mansion is the headquarters for the Platte County Historical Society – PCHS (to research the genealogical library,  learn more about the society or join, or to submit a research query, please visit the PCHS website). The mini mansion also operates today as an historic house museum with a library/genealogical archives in Platte City, Missouri.

The structure was purchased in 1977 by the Platte County Historical Society and the Platte Purchase Chapter Daughters of the American Revolution (DAR). A $38,000 bequeath from Ben Ferrel (a Platte County native), passed to these two organizations upon the death of Mr. Ferrel’s wife, Maria.  Society members raised an additional $135,000 to fund the restoration. The Frederic Krause Mansion entered into the National Historic Register in 1978.  Eight years later (on June 15th, 1985), the museum, though not completely restored, opened to the public.

Between 1882-1883, Frederic Krause built the home from bricks fired in his own brick works in Platte City. An immigrant from Prussia, Krause eventually settled in Platte City in the early 1860s and soon distinguished himself as both a builder and a merchant.
He owned a meat market on Main Street and operated a livestock farm nearby. During 1882, he and his wife Nancy Duncan Krause welcomed their youngest daughter into a family of five other daughters and one son.
Krause may have been inspired in building this home by his visits to the Governor’s Mansion in Jefferson City, Missouri.

Krause created a ‘mini’ or smaller version of the Missouri Governor’s Mansion in several ways: both homes feature slate, mansard roofs, ornate grill work, brick construction and limestone corner quoins. The bronze fireplace surround in the sitting room closely approximates the shape of a white marble one in the Governor’s mansion.

Three videos produced in 2016 and available on DVD showcase the story of the home: Introduction with Architectural Overview (12:47); Walking Tour of the Museum (36.32) and Aerial Views of the Museum (2:11). 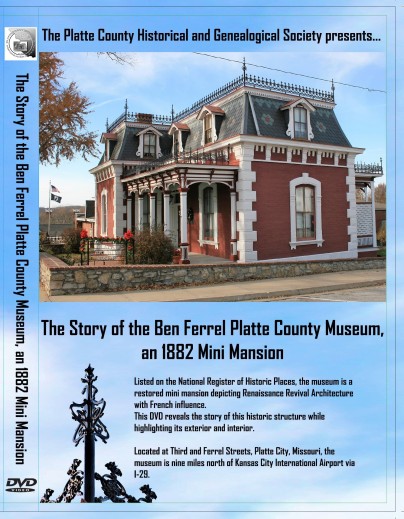 The Architectural Overview gives viewers a glimpse into the life of Frederick Krause and the history of this mini mansion as well as details about its architecture. Over ninety historic and architectural photos illustrate the narrative, compiled and written by Lisa Wittmeyer. Martha Brenner Noland narrates this segment.

The Walking Tour features Betty Soper, the former curator, leading us through the home. She reveals its history from residents through restoration and presentation of a collection that dates mainly from 1840-1900 and traces a Platte County connection.

The third video showcases a drone’s eye view of the mansion’s exterior.
Purchase information can be found in the Books section at the website for the Platte County Historical Society.

Visit the museum and experience a mini mansion authentically restored!
Each year the museum’s exhibits amplify not only aspects of Platte County and regional history but also aspects of the home itself–structure, site and collection. This blog is written by Lisa Wittmeyer for Ben Ferrel Platte County Museum.